modular methods to speed up delivery of 40 new hospitals. 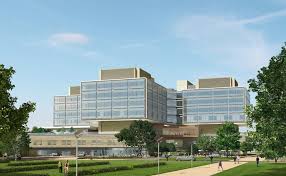 The government will develop new parameters to standardise the design of new hospitals and make use of modular construction methods to speed up the build, the Department of Health has announced. These are expected in the coming months.

The new hospital projects have been a centrepiece of government announcements for some time with details finally revealed of the 40 hospital projects they hope to deliver by 2030. The list includes two Carillion projects that were paused when the developer went into liquidation in 2018. The Royal Liverpool Hospital and the Midland Metropolitan Hospital have both faced further delays in trying to find a new contractor and securing funding.

Other projects include a £200m specialist eye care facility near King's Cross and the Whipps Cross hospital project that launched contractor engagement last month. University Hospitals of Leicester and Leeds General Infirmary will also be developed in HIP1.

The two new hospital buildings planned for Leeds at a cost of £500m should use offsite construction methods, according to early procurement plans. Leeds Teaching Hospitals NHS Trust said: "The trust shall require the design and contractor teams to ensure that a robust approach to the Design for Manufacture and Assembly (DfMA) and modern methods of construction (MMC) are considered and embedded from the outset."  In addition the project is expected to be net-zero carbon.

The design team for the Hospitals of the Future project is expected to be in place by early 2021 with construction to begin in 2023. The expected delivery date of the new buildings is 2025.

The Covid-19 pandemic delayed the appointment of the delivery team with a market open day planned for March 24, as the country went into lockdown. A hospital spokesman said the trust still plans to start the official procurement of the design team this month, with a market open day planned for consultants, designers and interested contractors on October 21. At that time the trust is expected to consider whether the project is fully deliverable within its current timeline.

Alongside the 40 projects formally announced, the government also announced a further £3.7bn budget for eight new projects. That involves the £2.8bn announced for six new hospitals in 2019. Shotley Bridge Hospital in Durham, Northumberland was also added to the list.

Matt Hancock hailed the announcement as 'the biggest hospital-building programme in a generation', saying that it would help protect the NHS long into the future. An announcement last year will see another 20 hospitals upgrading their facilities and equipment with £450m for 142 A&E upgrades to beat the winter flu season and a possible resurgence of the coronavirus by improving infection control and increasing capacity.

The benefits of modular construction in healthcare have long been recognised, focusing on quality, cost and speed with delivery time up to 50% faster than traditional methods of construction. There's a significant impact on waste making MMC a sustainable choice and ideally suited to meet ambitious net-zero carbon targets.

Constructed in a quality controlled environment, an additional ward or operating theatre can be installed to create additional capacity with the minimum of disruption to the everyday running of the hospital, making modular an ideal fit for this wide ranging initiative.

Red Construction on a roll with some great recent project wins.
A closer look at some of the challenges facing the electrification of the UK Rail network.
Refurbishment projects looking at new ways to increase sustainability.